Knitting patterns are like books. Some, I can happily knit over and over again. And often I’m surprised by which ones make the biggest impression on me.

One thing I love is how a simple pattern can be transformed by using a different yarn.

One of these days, I’d love to make a Perkins Cove Pullover in Sparrow, the yarn it actually calls for. Since I’m in Bulgaria, though, I have to really want a yarn before I’ll order it from the States (which does happen, btw, and more regularly than I’m proud to admit).

Besides the women’s market, the other place in Sofia I’ll shop for yarn is a little shop on Alabin Street. At any given time, they might have half a dozen non-acrylic yarns to choose from, and the woman who works there is fairly young and quite nice. Oh, and the yarn is cheap.

The nice lady speculated that it’s so cheap because much of it is actually made in Bulgaria. That way, it can have the coveted “Made in the E.U.” label. Yet another advantage to living in– what I like to call it anyway– The Trailer Park of the E.U.

Five euros bought me enough DROPS Safran to make my first Perkins Cove. Since it’s cotton, it doesn’t have the crispness or the sheen of the linen version. We’ll see how it wears. However, I love the immediate softness and lived-in feel of this sweater. I wanted a homemade-sweatshirt vibe, and I think that’s definitely what I got.

As I knit my little cotton raglan, the wheels started turning, and I remembered my five cones of Habu N-80 wrapped merino. This is pretty much the polar opposite of sweatshirt cotton: delicately variegated strands of merino wool, wrapped in silk thread. 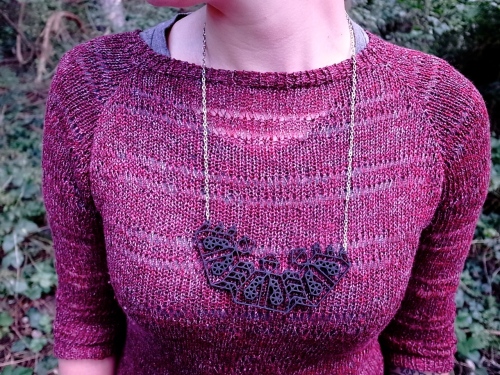 I used the same needles for both sweaters, but ended up with a much sheerer fabric in the merino. I cast on one size smaller for the merino, since I wanted something more form-fitting, and less boatnecked. I also added 1×1 ribbing to the hem, cuffs and collar for a more traditional-sweater look, and finished with a tubular bind-off. The pattern doesn’t include sleeve shaping, but I wanted a fitted sleeve so I added hella decreases on both.

Do ever knit the same pattern twice? Do you switch it up with the yarn, or stick to the same one?

Other Places You'll Find Me

buy me a coffee (only if you want to!)