A couple weeks ago, my friend Deni approached me with an amazing opportunity.

Deni works for UNHCR Bulgaria, which is unprecedentedly busy since Bulgaria became the ersatz home for thousands of refugees from the Middle East and North Africa. Many Bulgarians have responded to this recent influx of refugees admirably and with characteristic hospitality. Even still, the poorest country in the EU has had a tough time mustering up the facilities, infrastructure, and care that all these newcomers so desperately need.

As it stands, several thousand (no one can really tell me for sure how many) refugees from Syria, Afghanistan, and elsewhere are camping out in hastily-equipped, and previously abandoned, buildings in Bulgaria (if there’s one thing Bulgaria can offer, it’s abandoned buildings).

One of these buildings used to be a reform school for delinquent teens back in Communist days. Photos in the hallway told me the school was freezing, littered with broken glass, and moldy when the refugees started arriving. Now, the facility has seen impressive changes, new paint and windows, no more mold, a new cafeteria, and a few classrooms for residents of all ages to learn Bulgarian and vocational skills.

In my opinion, the refugees have the potential to be a godsend for Bulgaria. First off, Bulgaria is struggling with economic stagnation and massive emigration, as (mostly young, skilled) Bulgarians flee for Western Europe or the USA. Since 1990, Bulgaria has lost around 2 million people, or over 20% of its population. The evidence of emptiness is everywhere, especially in the smaller towns and villages. Some villages have whole blocks of abandoned houses, and seem entirely populated by pensioners and children (since parents leave kids with their grandparents while they look for work abroad). Bulgaria has the space to accommodate this influx of people, and many people here are sorely in need of work and fresh perspective. Improving this single empty school into a livable, usable space, probably provided dozens of people with work and revenues (and there’s plenty more empty schools where that came from).

In reality, though, Bulgaria is struggling to meet the demands of this crisis. The country is in a strange limbo; global aid institutions expect Bulgaria to be self-reliant, or at least EU-reliant, yet most Bulgarians see their quality of life falling further behind Western Europe. Fascism and nationalism have captivated many voters, as they do in desperate times. The refugees themselves aren’t often interested in staying; many see Bulgaria as just a stop-over on the way to Germany or further west.
As a Palestinian-Syrian told me in the women’s bazaar, “It’s hard to live here even for Bulgarians. For us, it’s just going to be harder.”

On Friday morning, though, we didn’t have to think about any of that. I had eight students, all women. As is the case with every beginning class I’ve ever taught, a few obviously had some crochet experience, and got right to work hooking their projects. For bureaucratic reasons that remain mysterious to me, we were not permitted to use one of the spacious, well-equipped, empty classrooms, and instead held our class in a staff member’s office.

A couple times, a student would excuse herself to gather one of her children from the refugee center’s school. Another volunteer graciously accepted the task of keeping children out of the room, to give their mothers a break, and a chance to concentrate on their new skill. Two little girls finally won the right to stay when they proved well-behaved and irresistibly sweet. They also served as my translators for the last hour of class.

I wanted to give my students a fun project they could finish quickly, and I settled on a crocheted cowl in bulky wool.

For certain projects, I’m getting more and more enamored of crochet. Knitting will always be my first and true love, but I love the speed, and textural possibilities, of crochet. A cowl is a great project for anyone looking to try crochet, and I’ve rounded up my favorite simple crochet cowl patterns.

There are some gorgeous patterns out there, that mimic knitting in elegant, neutral colors. I also wanted to highlight some designs that emphasize the distinct vintage-y look of crochet, with fun colors and stitches. I think both of the bright-colored ones would be beautiful in neutral colors as well (and the neutrals would look great in brights!) 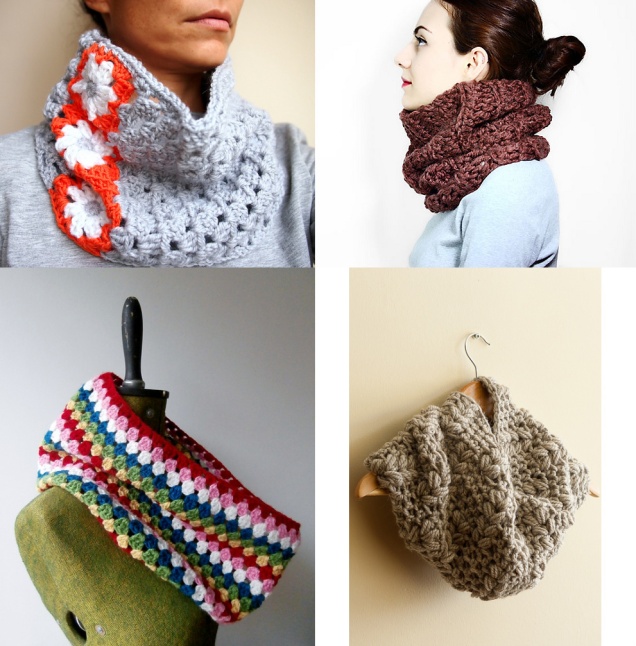 Other Places You'll Find Me

buy me a coffee (only if you want to!)